History of the College Backs

Cambridge is renowned for its prestigious University which is comprised of 31 different Colleges; eight of which you can see glimpses of along the river today. If you punt regularly, try using our College Backs History to impress your friends with some Cambridge facts. Develop some witty stories to suit your own style. 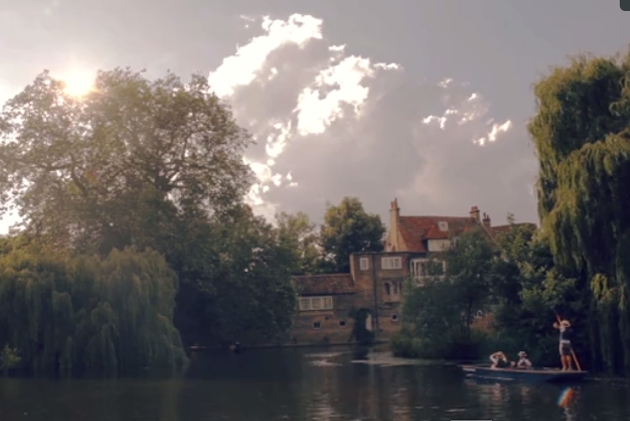 Darwin was founded in 1964 and is the youngest College on the river. Trinity, St. John's and Gonville & Caius joined together to create this graduate College. The only other graduate only College is Clare Hall. The college is built around an old mill which was once the family home of the eldest son of Charles Darwin (who had himself been a student at Christ's). The nearest building to Scudamore’s Mill Lane Punting Station is the library. This college was the first mixed college. 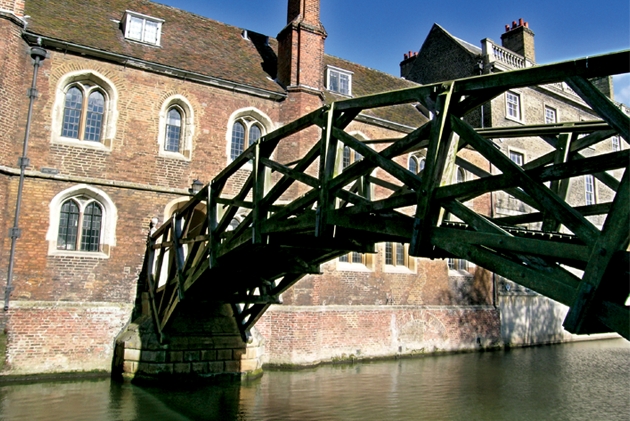 Queens' was founded by three queens; firstly as by Margaret of Anjou, wife to King Henry VI, in 1448. The College was refounded by Elizabeth Woodville in 1465, wife to the next king, Edward IV, and mother to the two princes famously murdered in the Tower of London. Queen Ann Neville, wife to Richard III, became Patroness in 1485.

Queens' point of pride along the river is without a doubt the Mathematical Bridge, built upon the principle of tangent-and-radial trussing which ensures its strength. This bridge links the President's Lodge built in 1460 and recognised as the oldest building on the river, to the Cripps court which was built in the 1980's.

Further along notice the Erasmus building, built in the 1960's, and named after the college's most famous student, Desiderius Erasmus. This was the first modernist building along the backs and caused much controversy. 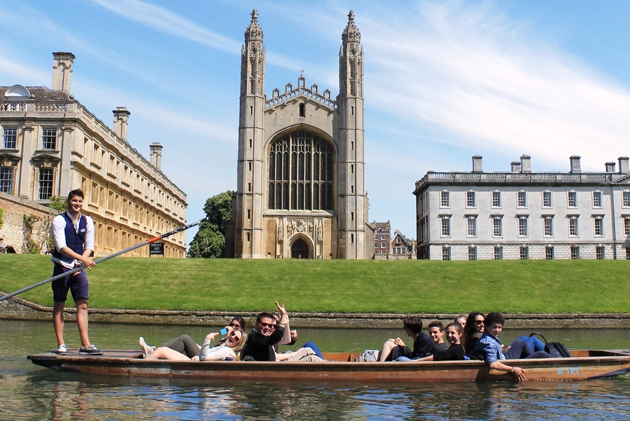 King's was founded in 1441 by Henry VI, one year after his other famous foundation, Eton. King’s has had many famous students from Alan Turing, the father of modern computing and famous cryptologist who cracked the Enigma code to the likes of Rupert Brooke, Xu Zhimo and Salman Rushdie.

The magnificent chapel was intended to be the centrepiece of the college, but sadly he did not live to see it completed as it took almost 100 years to build. The chapel survived the English Civil War virtually intact, despite having been used as stables for Cromwell's troops. Go on one of our guided tours to hear about the Night Climbers' pranks on the Chapel.

King's Bridge was originally built closer to the chapel but was thought to spoil the view, so was destroyed and rebuilt where it is today. The building to the right of the chapel is the Gibbs Building, and is said to have inspired the architecture of the White House itself. 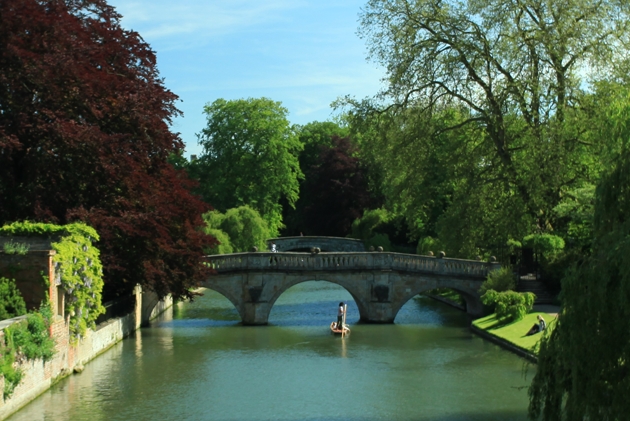 Clare College, originally University Hall, was founded in 1326 and is the second oldest college in Cambridge after Peterhouse. The College was refounded by Lady Elizabeth De Clare in 1338 when it ran into financial difficulty.

Clare Bridge is the oldest surviving bridge on the river, as Cromwell destroyed all the others during the Civil War, but kept this one to be able to cross the river with his troops. Notice the missing section on one of the 14 stone balls which decorate the bridge. It is said that the bridge's architect, disgruntled at being paid so little for the design of the bridge took a slice of the stone in form of payment.

Opposite the Old Court's magnificent classical architecture you can admire the Fellow’s Gardens. These gardens are said to be the most beautiful in Cambridge. Try and spot the Japanese banana tree close to the river bank: to everyone's surprise this tree bore fruit in 2006! No doubt they were an inspiration for famous zoologist and documentary maker David Attenborough throughout his time at the College. 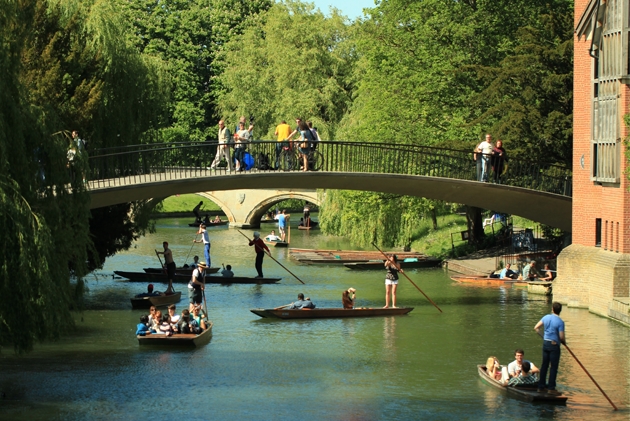 Trinity Hall was founded in 1350 by William Bateman, Bishop of Norwich, as an institution for the training of lawyers to replace those killed by the black death of 1348-1349. Its most famous student is Steven Hawking, who is still a member of the college today.

The Jerwood Library is the only part of Trinity Hall which can be seen from the Backs, and it is also the most recent building on the backs (opened in 1999). The building is said to have been designed to look like a ship.

The bridge by Trinity Hall was designed by Timothy Guy Morgan, a Cambridge student who won a competition. The extremely light, strong and rigid structure is supposedly modelled on a gull's wing. 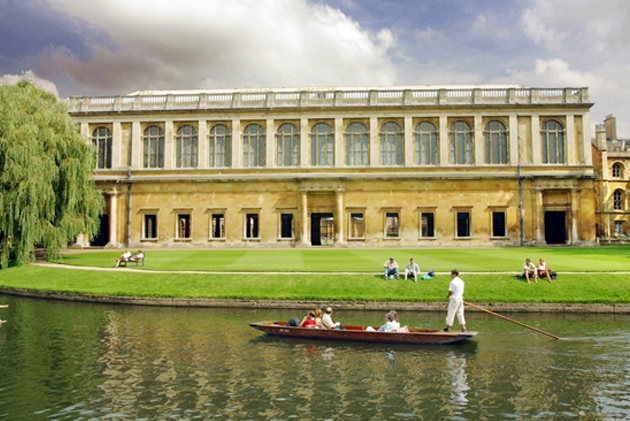 The foundation of Trinity College in 1546 was one of the last things that King Henry VIII did before his death. Much of the land and income he acquired whilst dissolving the monastries was given to the college, which explains its wealth today (estimated at £2 billion in total). New Court is where Prince Charles lived when he was a student here in the late 1960's.

Trinity Bridge was built by James Essex, who also designed the Mathematical Bridge and the Essex Building.

Observe the windows on the lower floor of the Wren Library; these contain no glass and the books are all kept on the first floor. This is because the architect was afraid of the Cam overflowing and damaging the precious books contained inside. Should the Cam ever overflow, the water will just pass through the window frames and flow back out without doing any damage. 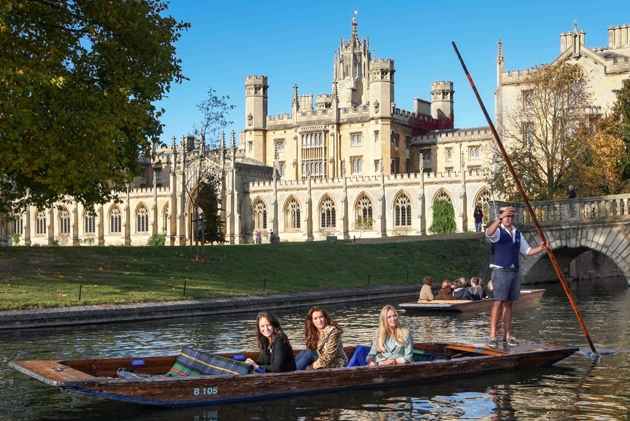 St John's College was founded in honour of Henry VIII's grandmother in 1511, Lady Margaret Beaufort. St John’s is the second largest and wealthiest College after Trinity, which is why they are fierce rivals. Poet William Wordsworth studied here.

St John's New Court is affectionately nicknamed the Wedding Cake by students. Spot the missing clock on the tower as you go past! There are many rumours as to why the tower is incomplete but as nobody knows for sure. You can have some fun making up your own story.

As you pass under St John's Kitchen Bridge, see if you can go through the arch closest to New Court – you’ll be able to see the flood mark from The Great Flood in 1947. 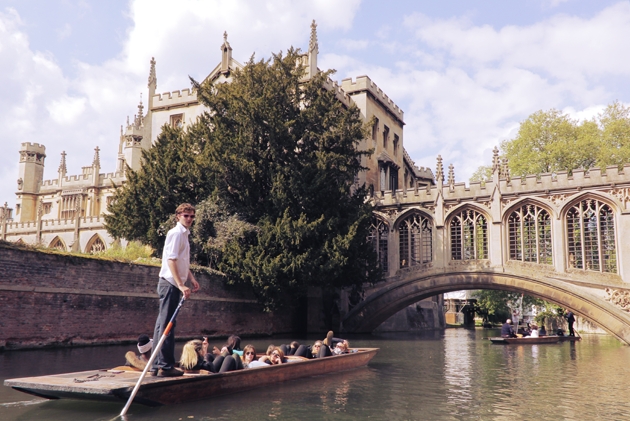 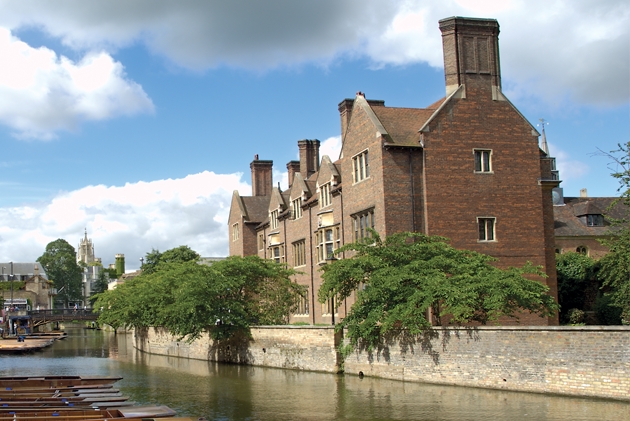 Magdalene was founded in 1542 by Thomas Audley, Henry VIII's Lord Chancellor and has the motto ‘Garde Ta Foy’ or ‘Keep Your Faith’. Famous students from Magdalene include Samuel Pepys and C.S. Lewis.

Magdalene is famously the last Cambridge University College to allow female students; as the first female students arrived in 1988 the male students held a funeral march claiming that their arrival would be the death of education!

The Lutyens building, mock-Tudor style built in 1931, is renowned for its staircases. Indeed, the student rooms are organised around 5 staircases and the architect had the bannisters on each of these carved a particular way. The staircases weren't originally lit, so this allowed students to find their way back to their room easily in the dark, or after a few drinks at the pub.

Magdalene Bridge stands in the exact location as the original wooden bridge over the Cam. It is the site of the oldest crossing on the river and is recorded as long ago as 731 AD.

Map of the Cambridge College Backs

Take a look at our College Backs map and outline of the highlights on your punting trip.

Combine your punt tour with a punting lesson for some adventure and enjoy mastering a new skill!