Stephen Hawking Film - Theory of Everything 2015

Cambridge Theory of Everything

Stephen Hawking Film - Theory of Everything

It's that new film being made about Steven Hawking,'The Theory of Everything: The Story of Stephen Hawking’ promises to be an informative, insightful and beautifully shot biopic on the life of legendary scientist Steven Hawking.

Scudamore's were lucky enough to see some of the filming this month. Working Title, the production company behind the film, had settled themselves on the lawn in front of the New Court Building from Monday 23rd September to Friday 27th September. On the final day of filming two lucky Scudamore's chauffeurs were granted access to the set, Dan Richards and me (Grace Williams). The Location Manager, Claudia gave us a few moments of her time to answer our questions about the film. 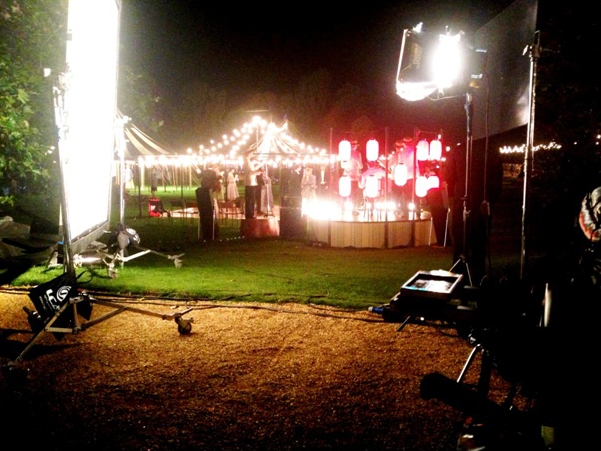 The scene they had been shooting outside The New Court as we arrived was in the section of the film which focuses on Hawking’s early life, studying at Cambridge University before he received his diagnosis. That night they were filming a May Ball set in 1963 where Hawking, played by Eddie Redmayne – also a Cambridge Graduate who received a 2:1 in History of Art from Trinity College in 2003, watches the May Ball fireworks with first wife played by the intelligent and stunning Felicity Jones .

The atmosphere of excitement of our Cambridge University May Balls was captured perfectly. The New Court lawn and Kitchen Bridge were both lit softly with large bulb fairly lights, lanterns hung in the trees and the traditional steam powered merry go round was a charming addition to the background. A huge collection of authentically dressed, champagne drinking, swing dancing extras were scattered across the lawn mingling and chatting over the sound of a smooth swing band. 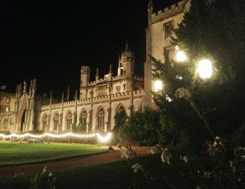 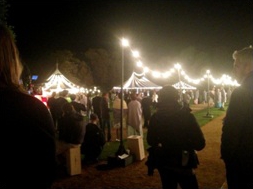 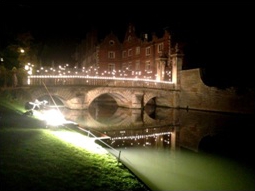 Despite being given just 2 years to live at the time of his diagnosis in 1963, a smiling Steven Hawking joined us on the set many years later, to watch the fireworks display and to share a brief but lovely conversation with Eddie Redmayne and Felicity Jones. They spoke only for a few minutes and Eddie said how they told him his hair should be messier – Hawking with a smile informed him ‘your hair is fine’. After a few photos, Steven Hawking was taken to his own tent and filming continued. 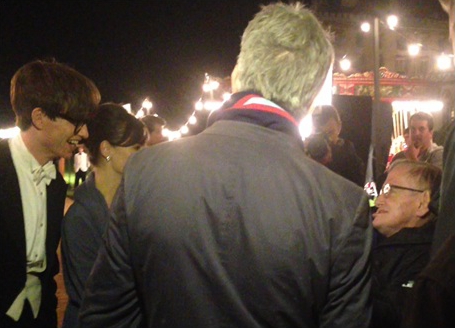 Claudia also explained that although the scene was set in 1963, the costumes were dated from the fifties era because the latest fashions of the time took a while to filter into the intelligentsia. At the time of this ball the graduates would have still very much been dressed in fifties styles. The dresses looked spectacular!

Amazingly, there were 3 takes of the fireworks display in total so we were treated to 3 identical fireworks displays designed by Titanium – The same company who did the London Olympics fireworks last summer. I hope the film captures how spectacular they were!

The May Ball scene was the last of the outside shoots and they would be filming in a lecture theatre the following day and then in studios for the remaining 5 weeks of this 9 week shoot. She explained how this week they had been filming around the city; making the most of Cambridge before completing the remaining scenes in studio.

We were politely ushered under the trees close to the river by Steven Hawking’s tent to watch the final display, where we bumped into Professor Chris Dobson, Master of St John's College. He had come across the Bridge of Sighs from The Master’s Lodge with his wife to see how the filming outside the New Court was going. He had also seen them filming inside St John’s in some of the courts. He was delighted at their progress and said he thought it was a fantastic project.

Tucked away here by the banks of the river, we could watch Eddie Redmayne and Felicity Jones rehearsing via the playback monitors. Eddie’s depiction of the young Hawking was flawlessly well observed and I am very excited to watch his interpretation and the scene (photographed) when the film is released! I will have to be patient since it doesn’t come out until 2015. 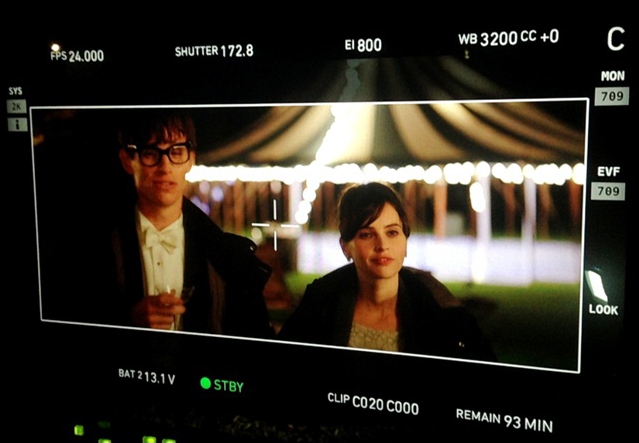 It was a fantastic evening spent on a calm, well organised and focused film set with the ever romantic New Court Building as a spectacular back drop. Directed by award-winning documentary maker James Marsh and produced by the same company that bought us film sensations such as ‘Les Miserables’, ‘Anna Karenina’, ‘Tinker Tailor Soldier Spy’ and ‘Atonement’, I’m sure it won’t disappoint. 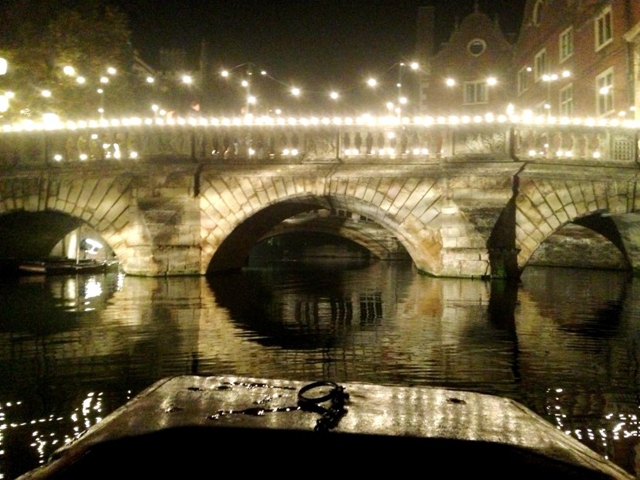 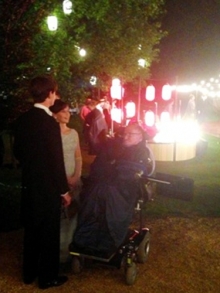